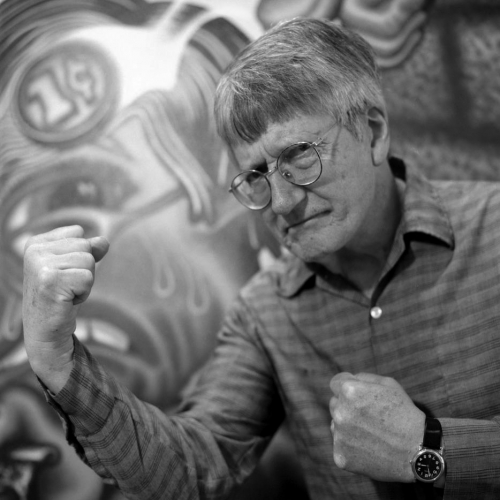 Peter Saul is a contemporary American painter known for his genre-defying paintings satirizing American culture. Influenced by the cartoonish style of MAD Magazine, Saul uses Day-Glo color and lush forms as a foil for his nightmarish content. One of his most famous works, Saigon (1967), embodies the chaos and deformities that typify Saul’s scenes, offering the viewer a feverish candy-colored vision of the Vietnam War. “I enjoy finding a low subject and bringing it up high,” he has said. “I think with strong technique, you can glamorize certain things. You can make the imagery sharper, rounder, and basically better looking.”
Born on August 16, 1934, in San Francisco, CA, he studied at the California School of Fine Arts before receiving a BFA from Washington University in St. Louis in 1956. After finishing school, he lived in Europe where he met the Surrealist painter Roberto Matta, and the American art dealer Allan Frumkin, who went on to represent him for three decades. In 2008, a retrospective of his work was held at the Orange County Museum of Art in Newport Beach, then traveling to the Pennsylvania Academy of Fine Arts in Philadelphia and finally the Contemporary Art Center in New Orleans. In 2010, he was elected to the American Academy of Art and Letters. He currently lives and works between New York, NY, and Germantown, NY.
Today, Saul’s works are held in the collections of the Whitney Museum of American Art in New York, the Center Georges Pompidou in Paris, the Museum Ludwig in Cologne, and the Stedelijk Museum in Amsterdam, among others.