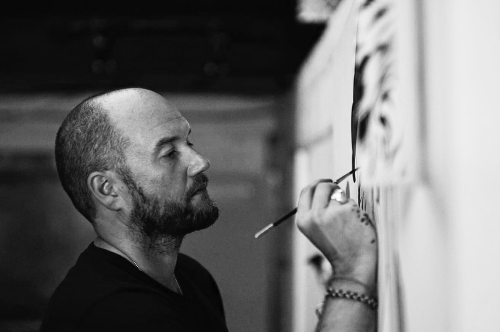 D*Face is a contemporary British street artist best known for his distinctive graffiti, stickers, and posters placed in various cities around the world. Featuring recurring imagery of celebrities and punk iconography, D*Face’s oeuvre is characterized by his bright, graphic aesthetic, he focuses on consumerism and the ways in which it shapes everyday life. His diverse range of influences include skateboarding culture, early New York City subway graffiti, Pop Art, and Shepard Fairey’s Obey campaign.

Born Dean Stockton in 1978 in London, England, he worked in advertising and for publications like Thrasher magazine before embarking on his own artistic career. A reported friend of the famed anonymous street artist Bansky, D*Face’s identity remained a mystery until 2008 when he revealed his name to the public. “I don't find that it's necessarily relevant that you know who I am with regards to my work,” he once explained. “The work speaks for itself, and if it doesn't speak for itself, then I like people to interpret it from their own perspective.” The artist lives and works in London, England.

D*Face | Artist Up
D*Face, the hidden side of the american model March 2018

Read the article (in french)
Back To Top