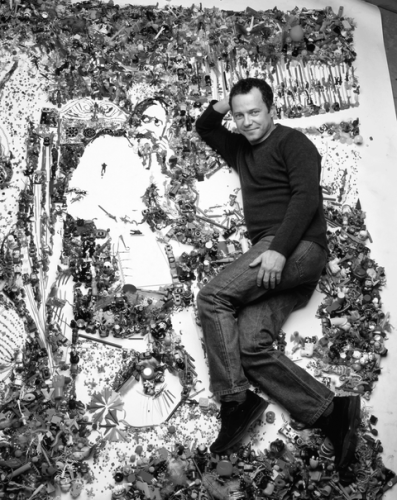 Vik Muniz was born in 1961, in São Paulo, Brazil. He is a Brazilian artist and photographer. Initially a sculptor, Muniz grew interested in the photographic representations of his work, eventually focusing completely on photography. Primarily working with unconventional materials such as tomato sauce, diamonds, magazine clippings, chocolate syrup, dust, dirt, etc., Muniz creates works of art and then photographs them. His work has been met with both commercial success and critical acclaim and has been exhibited worldwide.

In 2010, Muniz was featured in the documentary film Waste Land. Directed by Lucy Walker, the film highlights Muniz's work on one of the world's largest garbage dumps, Jardim Gramacho, on the outskirts of Rio de Janeiro. The film was nominated to the Academy Award for Best Documentary Feature at the 83rd Academy Awards.

In the last two decades, Muniz´s work has been exhibited in museums and galleries worldwide and is included in the collections of the major international museums, such as the Art Institute of Chicago; The Museum of Contemporary Art in Los Angeles; the Paul Getty Museum; The Metropolitan Museum of Art; The Museum of Modern Art in New York; the Museu de Arte Moderna in Sao Paulo; The Victoria and Albert Museum in London and the High Museum of Art in Atlanta.