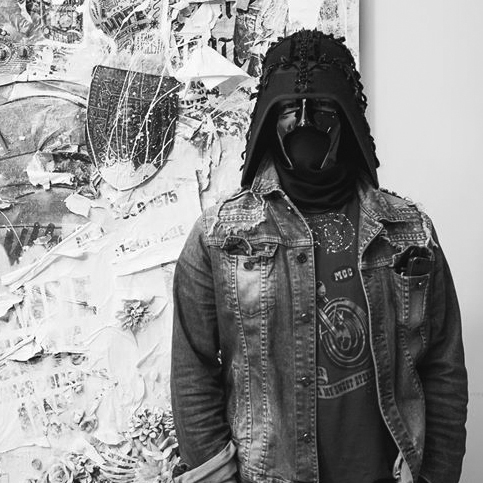 Satirical and ironic, Stikki Peaches’ works invite you to pause, analyze, and will likely leave you feeling nostalgic. Originally from Montreal, his singular style is as popular in galleries as it is on the walls of the world’s busiest metropolises. His father is a tailor and his mother a designer, Stikki Peaches’ first creative endeavors were in fashion design, an industry that deeply influenced his artistic practice. As a child, he was surrounded by sketches and drafting patterns, which he happily collected, reassembled, and transformed with paint and pencils. His style is rooted in this spirit of reusing and recycling, where a myriad of techniques are combined to reveal the influential figures of his childhood. His vibrant compositions feature mythical characters, political leaders, and cultural icons: Batman, Elvis Presley, and Mozart coexist, creating a startling juxtaposition of themes and aesthetics.

Stikki Peaches sees art as an escape, an outlet that allows him to move away from what hinders his growth as an artist and as a human. His tagline “What if Art Ruled the World?” fits this context. This question echoes the artist’s stance, suggesting that conflicts and disasters affecting our society would have no basis if the world were governed by art. Through his works, Stikki Peaches invites the onlooker to contemplate the effect and importance of art. His practice aims ultimately to democratize it: by taking his practice to the streets and incorporating pop culture references, Stikki Peaches distances himself from elitism and abstruseness often associated with the contemporary art world. Striking, colorful, and iconic, his pieces are well-suited to digital culture, which values bold visual content.

The Montreal-based artist’s works are found in various private collections in the United-States, Europe, and Canada. Since 2013, Peaches steps out of the studio to participate in MURALFest, an annual event celebrating graffiti art in Montreal. In 2016, his piece entitled MO.Z. was selected to adorn Romeo Gin’s first edition of bottles. His works were also featured during a special event at the Musée National des Beaux-Arts du Québec. 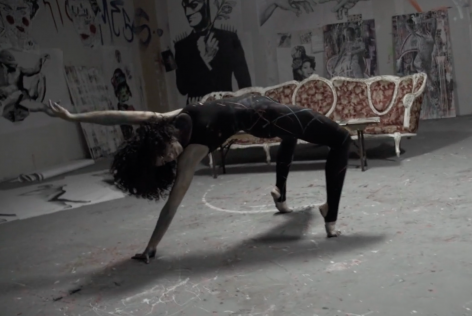 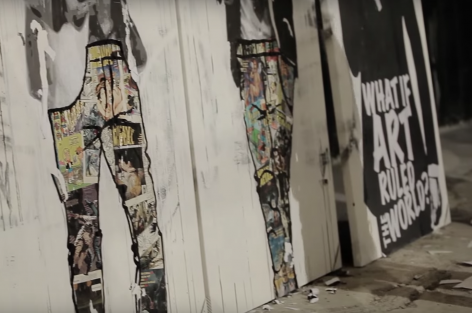 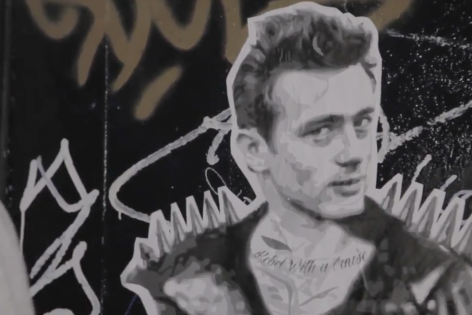 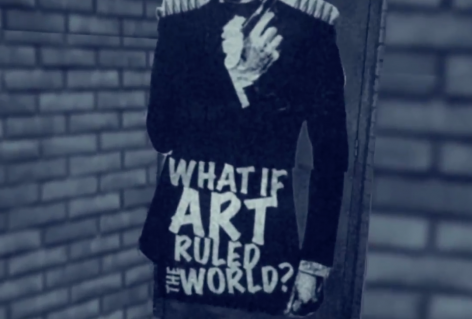 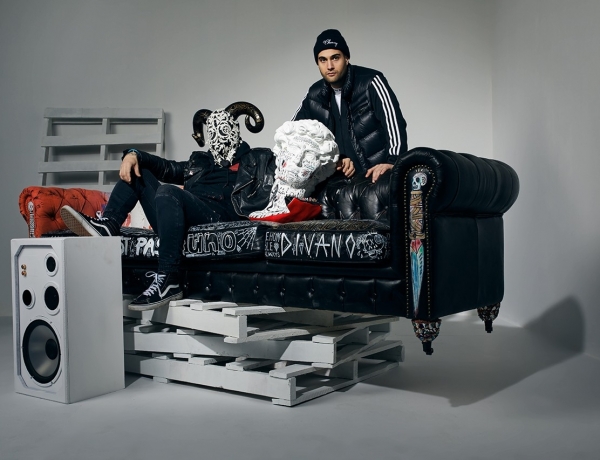 Montreal-based graffiti artists Stikki Peaches and CDI Furniture have come together on a one-of-a-kind collection of distressed Chesterfield sofas for the launch of Bois & Cuir‘s new furniture store. The graffiti-covered sofas and divans form a collection called “CECI N’EST PAS UN DIVAN,” in which Stikki Peaches has taken the British design classic and given it a distressed finish. Sofas were given a street art-inspired rework with metal studs, spray paint, acrylic and painted Tunisian tiles each getting added to the leather upholstery. 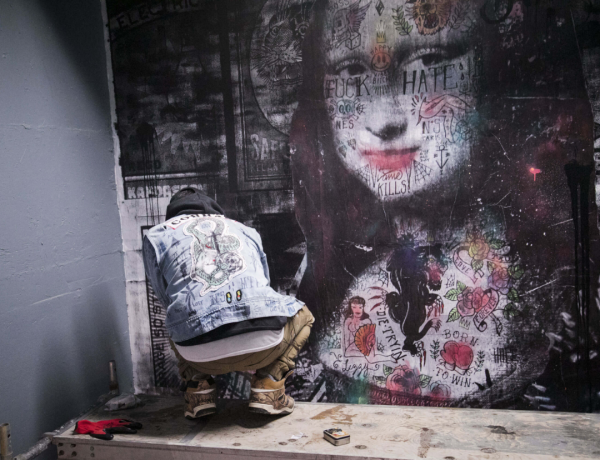 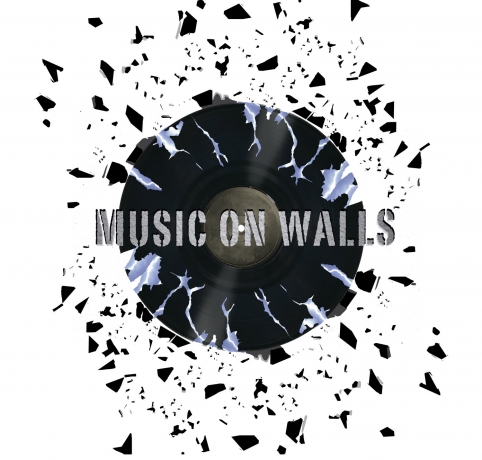 In his new solo show “Chiaroscuro : A Stikki Obsession” at Galerie LeRoyer, the artist Stikki Peaches is presenting 20 new Interpretive Hybrid works inspired by the paintings of Caravaggio and his School. Many of the artist’s favorite iconic characters are present. Such as his favorite musical artists Jim Morrison, Amy Winehouse & Kurt Cobain, who all tragically died at age 27. This piece, originally titled Saint Cecilia with Two Angels by Caravaggio follower Antiveduto Gramatica, is now titled The 27 Club for the obvious reasons. The Lute Player as a psyched-out and surreal Jimi Hendrix. 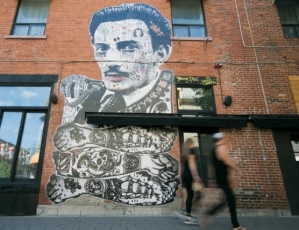 Read the article (in french) 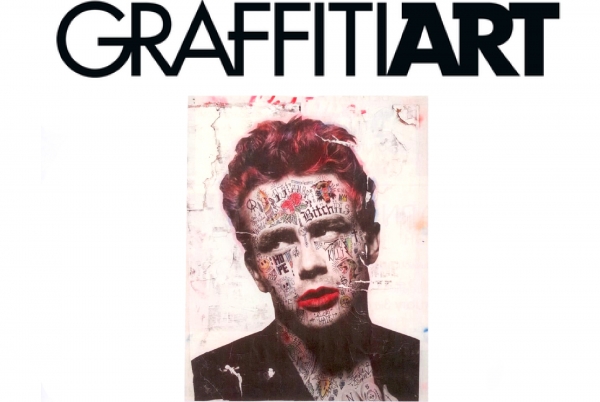 Willingly staying anonymous, Stikki Peaches pictures masked superheroes or overexposed fashion and movie icons that fascinated him as a child. Their faces are his playground. The Montreal-based artist gathers and superposes layers of paper, old magazines, comics, fabrics, reclaimed objects, then writes, spray-paints, tattoos and little by little transforms their irreproachable physique to convey his messages. He leaves his wheatpastes on the walls of Canadian, American and European cities. If you stumble upon one, do feast your eyes on it as his street works are all original pieces. 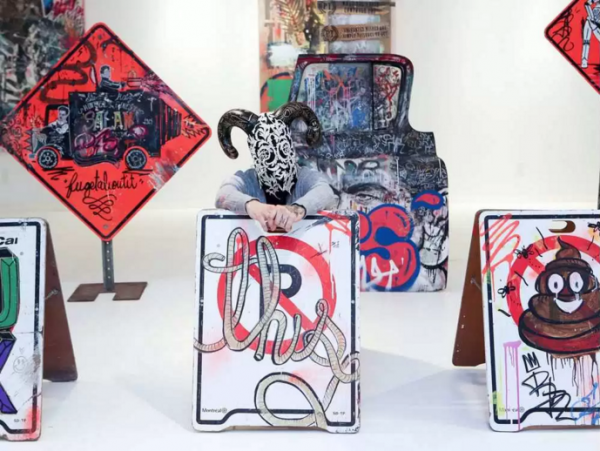 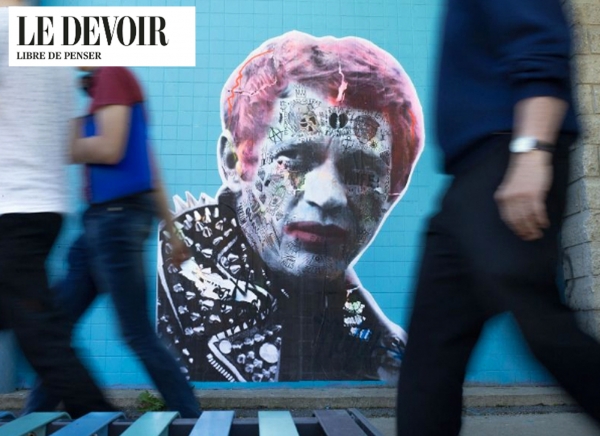 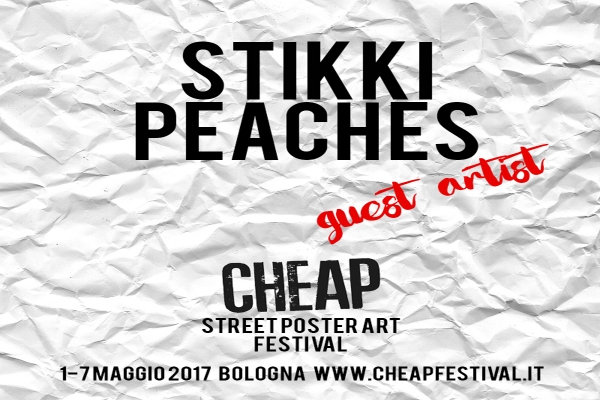 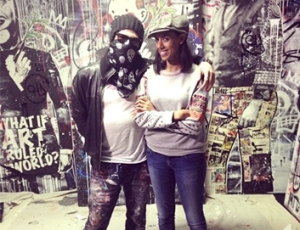 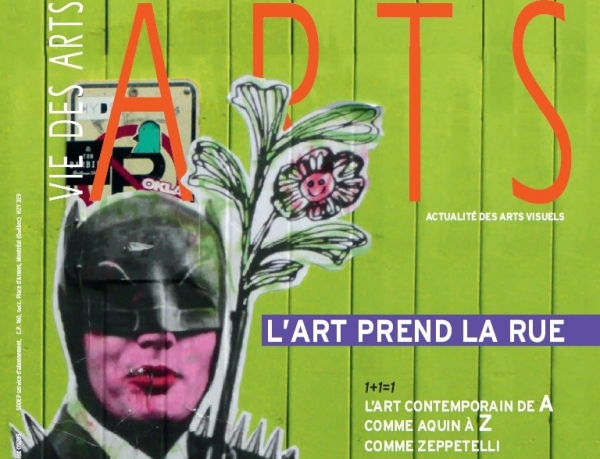 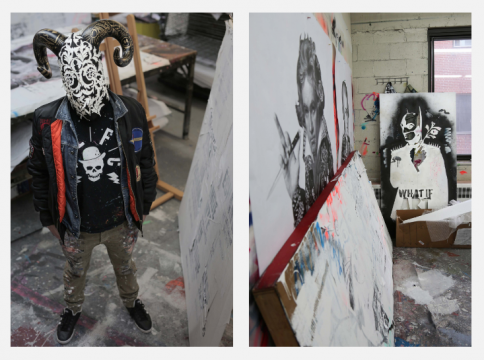 Since first flirting with street art in late 2008, operating entirely on instinct and without a clear purpose, Stikki’s surreal, eye-popping pastiches have built up a passionate following both online and IRL, with big-name fans of the Coco Rocha and Lady Gaga ilk. 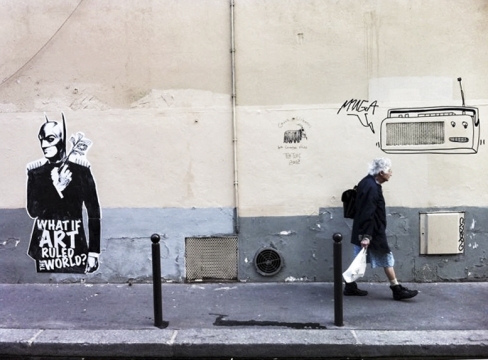 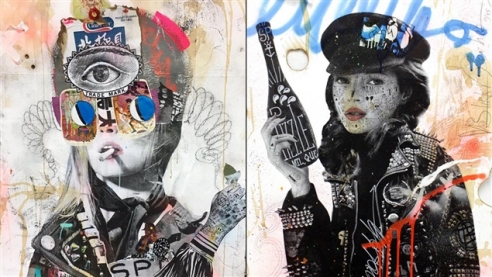 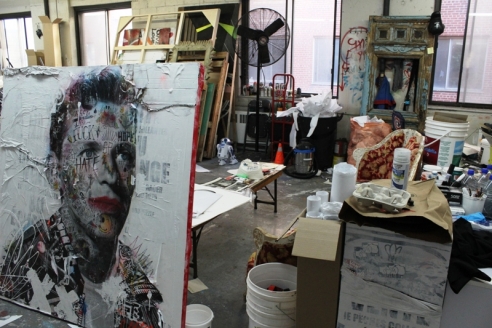 I entered Stikki Peaches’ industrial studio to find the Montreal artist hard at work on yet another exciting piece. He was in the midst of placing paint can tops over the eyes of a giant John Travolta laid out against the wall, while CHOM 97.7 blared in the background. 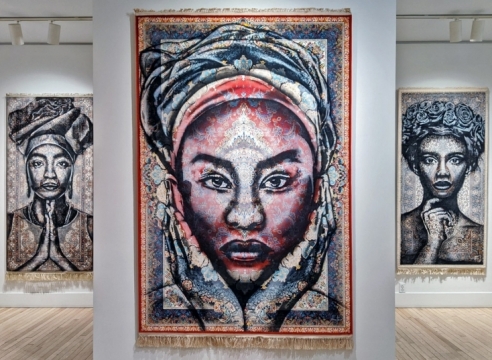 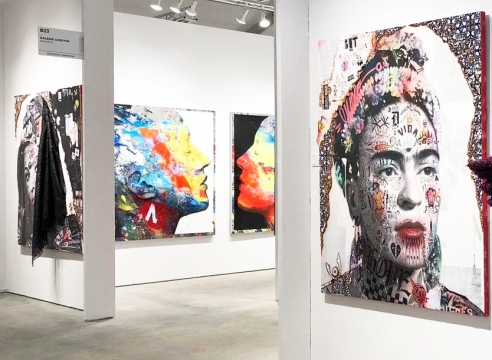 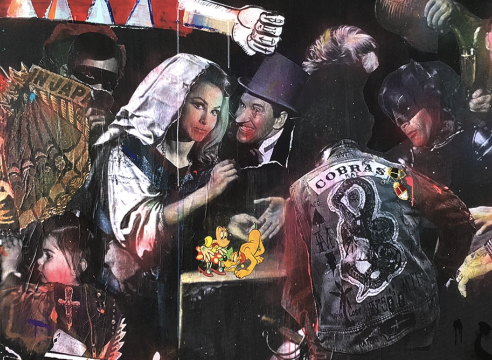 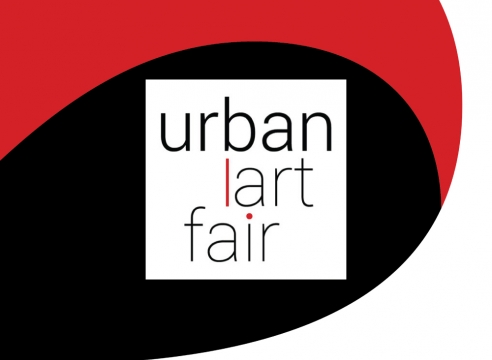 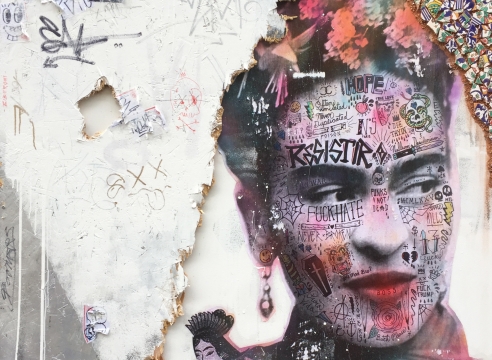 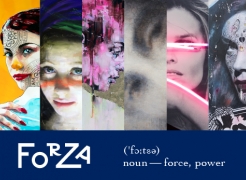 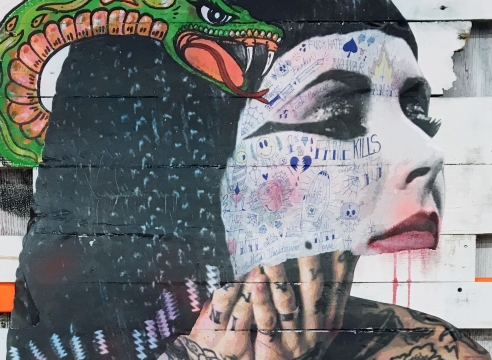